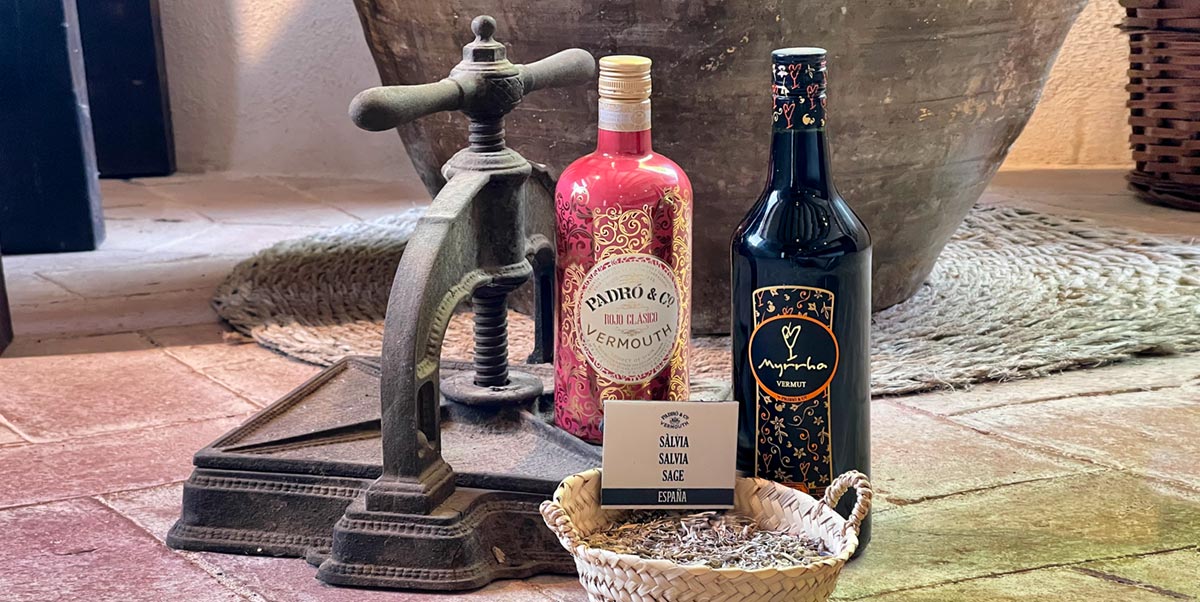 Sage, with its combination of bitter and spicy flavours, can often be perceived in white vermouths and is one of the botanicals that we also use to make our Myrrha Rojo and Padró & Co. Rojo Clásico. It is one of the best-known aromatic plants in the Mediterranean. The beneficial properties of this herb have been recognised since ancient times and the Latin name for this plant species commonly known as sage is Salvia Officinalis, belonging to the Lamiaceae family.

Salvia comes from the Latin verb salvare (to save or preserve) and the adjective salvus (safe and sound). Pliny the Elder, Roman imperial procurator from the 1st century AD, in his Natural History, already described salvia in detail as well as how it can be used for cleansing. In fact, it seems that in the Mediterranean basin, sage had already been used long before that, since it is thought that the ancient Egyptians would have used it to treat abdominal diseases, asthma, dental pain and insect stings.

Throughout history the herb has been the protagonist in a series of proverbs that highlighted its healing properties. It has appeared in botanical treatises and historical texts. For example, in the Carolingian Empire’s Capitulare de Villis, a legislative act from the late 8th century, salvia is listed as one of 73 plants to be planted in royal gardens. During the Middle Ages it was a highly valued plant that was grown in the gardens of the monasteries of Europe.

A plant for the whole body

The 16th-century German physician and botanist Hieronymus Bock also extolled the virtues of sage wine, or the herb cooked in wine, and sage water as a remedy for different parts of the body. According to this doctor, sage eliminated poison, calmed coughs, warmed the liver and the womb, relieved illnesses caused by cold and healed ulcers, wounds, sores and bites.

The astringent properties of sage and its ability to tighten mucous tissues and tone them make it a highly valued plant in herbalism for relieving sore throats and mouth complaints. Thus, sage is a common ingredient in toothpastes and mouthwashes.

Its anti-inflammatory properties are beneficial in relieving menstrual pain and even in combatting excessive sweating and hot flashes. Sage is a good antiseptic for treating skin problems and healing wounds and sores. Sage essential oil can also be used for massage. In addition, recent studies have also shown that sage, taken as an infusion, or in pills or tinctures, improves cognitive function and levels cholesterol and diabetes markers thanks to its antioxidant properties.

Sage in gastronomy and in the liquor industry

This plant is also suitable for improving digestion and relieving gas, either by taking it as an infusion or as an aromatic herb to season dishes. A combination of bitter and spicy flavours give sage a special touch as a condiment, especially in heavy meat dishes. It is a versatile complement that can be added to many foods.

In addition, it is also used in the spirits industry, as one of the ingredients in many herbal liqueurs or as the main botanical in traditional salvia liqueur. Sage is one of the plants present in the infusion of botanicals for the preparation of some of our vermouths. To find out more about that, come and visit us at our Casa Vermouth Padró!